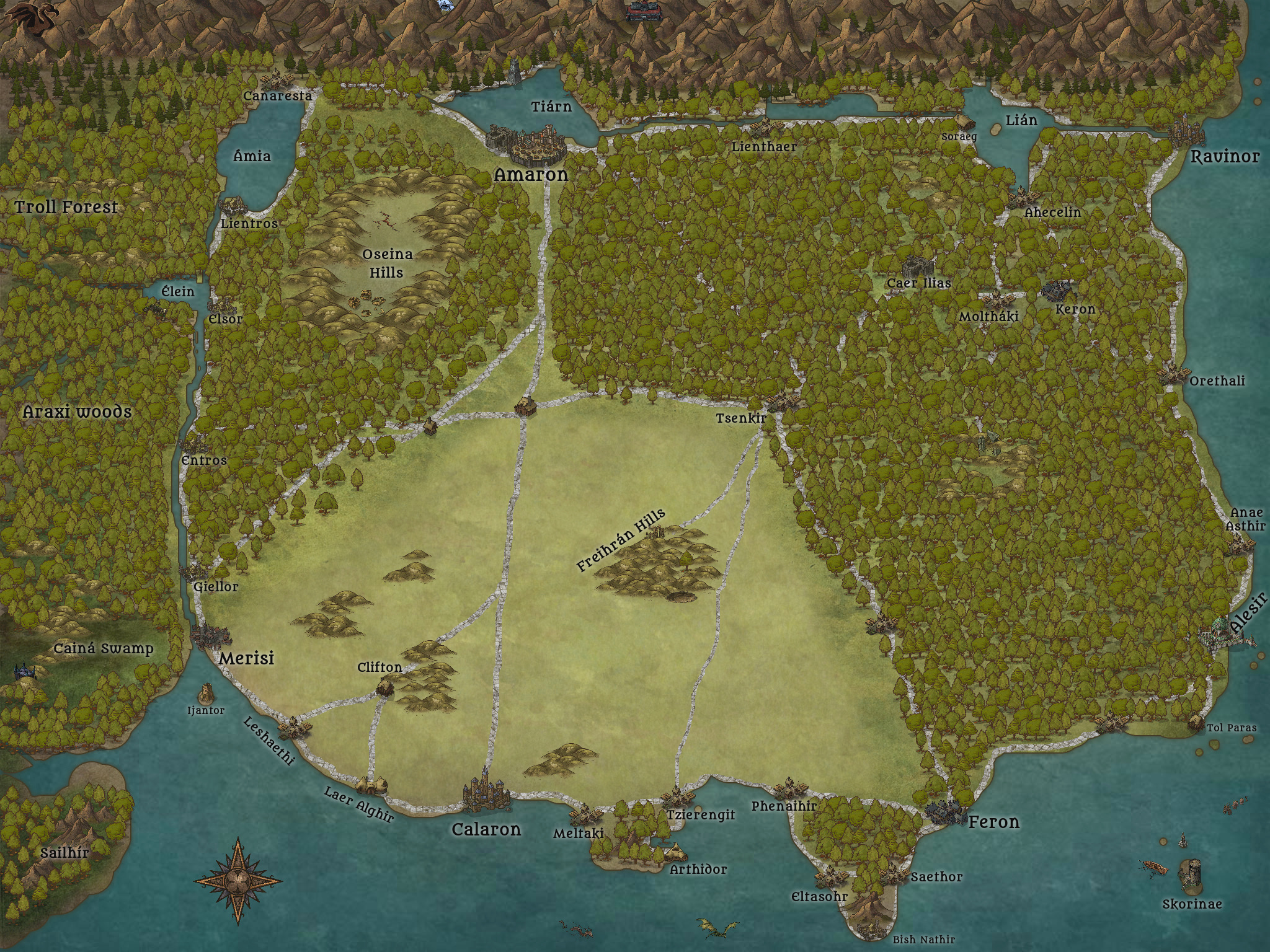 Your are now reading the fantasy game of Amar. Fantasy is a literary term dealing with myth and magic. It is usually based on a medieval world were the gods are real and magic is a way of life. Here you will find the valiant knight battling it out with the mighty dragon to rescue the fair princess.

You have probably already encountered some fantasy books like JRR Tolkien’s Lord of the Rings, JE Howard’s Conan or films like Willow or Princess Bride. At least you have heard about King Arthur or legends of the Greek, Celtic or Norse mythologies. They all embrace the mystic feeling of adventure.

The Amar RPG allows you and your friends to collectively imagine an epic adventure. It is similar to reading a book or watching a movie, except that you are controlling the actions. There is no set plot or outcome, it all depends on your decisions. You make your way of life in a fantasy world.

When you start playing, it will be on the island of Amar. This is a place were the legends are real and your fantasies come true.

As a player, you are not actually playing out yourself in the fantasy world. You create a character that you play and act out as your alter-ego. This character may be anything from the valiant knight to the fair princess or a barbarian gladiator or even a sorceress. The more you involve yourself in your character, the more rewarding the game will be.

The characters played by the players are called player characters, or PCs. In the Amar RPG there are no real winners as in other games. The players act together to defeat the perils they encounter. Survival is easiest when the PCs cooperate. You may gain some treasure or lose some honor but in all, it is all about living out your fantasies.

The real reason for playing the Amar RPG is to have fun. Never forget that!

What Do You Need?

Since this game is played out in the imagination of the players, you need that for a start. You also need a couple of friends to play with. With the books in the starter set, a dice, paper and pencil you are all set to go!

To see that everything is done right and in a fair way, you need the rules and a game master.

The game master creates and plays out the dangers and the people the player characters meet. After all, the island of Amar is populated by more than the few player characters. The rest is played by the GM as they are encountered. The GM creates the framework of the game before you get together to play. He creates the adventures that the PCs later play. He creates towns, inns, castles, traps, monsters and all the people in an adventure. All this information is kept secret from the players. They will discover it as they play.

We have included a ready to play adventure in the starter set. This will make the job easier for the GM in the beginning, as he doesn’t have to create much in order to start playing. Other ready to play adventures will be published on our web site. The creatures and persons that the GM plays are all called non-player characters or NPCs. The GM must remember to be impartial. He should not favor any player or player character. He should be realistic in making his adventures and playing the NPCs. The GM must keep in mind that the game is only fun as long as it is not too easy or too hard.

Also, the GM must be strict in his decisions. If a character dies, he dies, and if he finds a huge treasure, he finds the treasure. Even if it is not deserved. Remember to keep a good game balance between opposition and reward. That makes all the fun.

Somewhere in your home you will probably have a dice, confiscate this for playing the Amar RPG. It is practical for each player as well as the game master to have their own dice.

The dice is used to determine the outcome of many situations. A dice roll is usually made whenever there is a doubt about the outcome of an action. If a character (PC or NPC) tries to climb, swim, fight or cast a magic spell, a dice is rolled to check if it is successful. The procedure for this is explained later. The abbreviation for dice is simply d. Sometimes you are supposed to roll a dice and add a number to the result. This is written for instance d+4 if you are to add four. D-2 means that you must subtract two from the dice result.

What Do You Do?

Since you have already read this far, you are familiar with the basics of the Amar RPG. Both players and the game master should read the introduction. Only the GM needs to read the rest of the book. The next three chapters are the heart of the game, the rules.

You should read it carefully and be very careful not to read past any words you do not fully understand. If you encounter such a word, look it up in a dictionary. The GM should make a character and try out the game mechanics as he reads about them. Have fun!